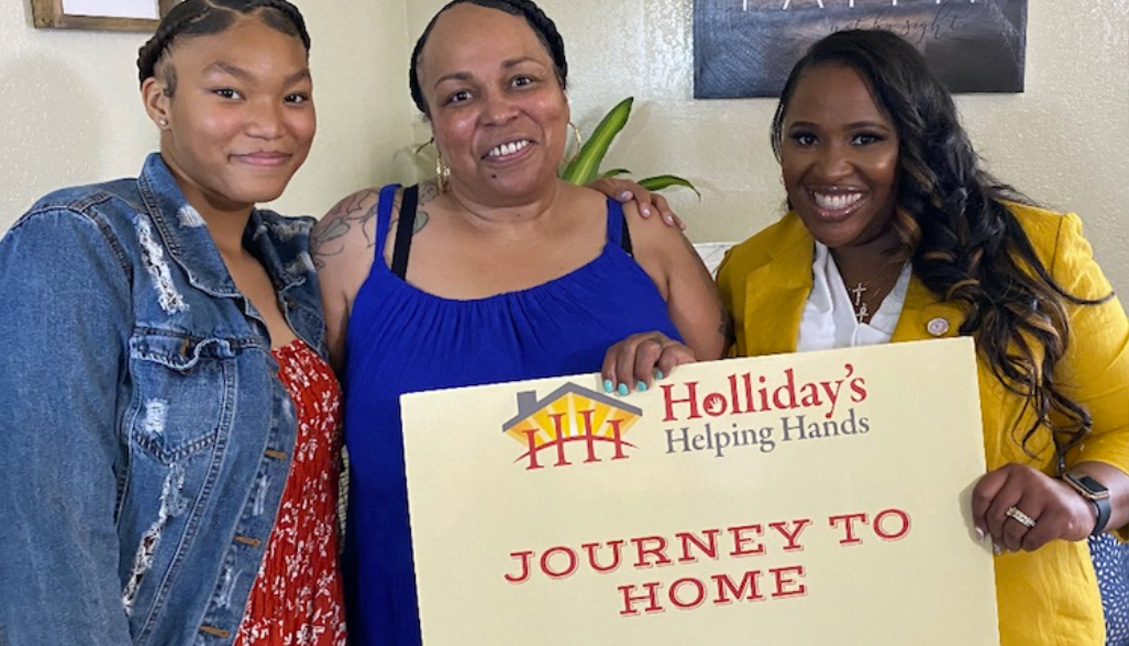 Katina Holliday founded Holliday Helping Hands to help transition formerly imprisoned women and men back into society with job training, housing and, most of all, caring.

Danielle Ware is among the grateful women who have been able to turn tragedy into triumph. But, her journey to personal victory was not easy. It began with a sexual assault when she was a child and later, an abusive husband who caused her life to spiral out of control.

She was arrested as a result of charges related to a failed money scheme her husband orchestrated. During her stint in prison, her son was murdered in Moreno Valley. Although Ware was traumatized, she demonstrated the courage to change her life. Fortunately, “help” was on the way.

Holliday’s Helping Hands (HHH), an L.A.-based nonprofit started by Katina Holliday, was determined to provide the resources and compassion that she needed to move forward.

HHH supports women recently released from prison by providing roadmaps for their futures. After completing the program, Ware received a voucher for her own apartment from the county and HHH provided all the furnishing. She is now working on gaining full-time custody of her daughter, which she shares with the girl’s grandmother and learning sign language to work with the hearing impaired.

Holliday concurred. “Words cannot explain how elated I am to see people like Daniella able to live on their own and start achieving their dreams so they can reach their full potential,” she said.

Over half-a-million Americans are unhoused, and their numbers have spread in Los Angeles like wildfires. Tents are erected under freeways, on sidewalks, in parks, and there doesn’t seem to be an end in sight.

“During the past 10 years, I have dedicated my career to serving the homeless,” said Holliday, who is also a family nurse practitioner. Holliday said she began HHH’s Shine Ambassador Program to provide temporary housing for the homeless.

Founded in 2018, HHH operates eight facilities (388 beds) that are actual homes. HHH also operates two hotels in Long Beach. They were converted into temporary housing during COVID. L.A. County started a program called Project Home Key, enabling HHH to operate both of those locations. The County of Los Angeles, Department of Health Services’ Housing For Health and Office of Diversion and Reentry Programs provide funding for HHH programs.

Enrollees adhere to a strict job training regimen. For instance, one of the programs requires them to earn their food handlers license, shadow chefs and work in kitchens in preparation for a restaurant career. There is also a property maintenance program for those who desire to work outdoors. Graduates are awarded certificates of completion that serve as a source of pride.

“We are really excited to open our first facility serving the LGBTQIA population,” said Holliday. “This is particularly important as many of these clients have been kicked out of their own homes and are left struggling on the streets.

“I think I can speak for the entire HHH staff when I say that witnessing these dramatic transformations is our ultimate payoff,” she said. “We stay in touch with them to make sure they remain on track,” she added.

Holliday attributes her inspiration to launch HHH to her grandmother, Denise Payne of Aberdeen, Mississippi. Payne provided constant care for Shine, the town’s most vulnerable unhoused member, who relied on the kindness of locals, such as Holliday’s grandmother, to take care of his most basic needs like food and clothing. That laid the foundation for Holliday’s Helping Hands and the Shine Ambassador Program.

HHH has dedicated events that the public can attend. It is partnering with The Liberty Church in Gardena to hold their 2nd Annual Harvest Fest on Sunday, Oct. 30, from 11 a.m. to 3 p.m., at the church’s campus located at 14725 Gramercy Place in Gardena. Admission is free and open to the public.

They will hold their inaugural gala benefiting Holliday’s Helping Hands Foundation in November. For more information on HHH’s housing program and upcoming events, visit www.hollidayshh.org or call (310)714-2104 and ask for Twila.